The spiderwasps were a species of large spider-wasp hybrids engineered in Venezuela, originally created as a method of pest control on Spiderwasp World. A queen escaped in 1987 of that world's timeline, and by 1995 had spread throughout South and Central America, and had begun invading the United States. A televised news broadcast on the world stated they had a foot long wingspan, a barbed stinger filled with venom, an immunity to pesticide, and the ability to eat through walls. 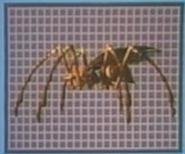 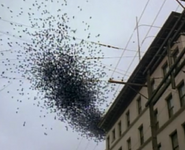 A swarm of Spider Wasps
Add a photo to this gallery
Retrieved from "https://sliders.fandom.com/wiki/Spiderwasp?oldid=5570"
Community content is available under CC-BY-SA unless otherwise noted.